It's Not Your Mama's Sunday School Anymore! 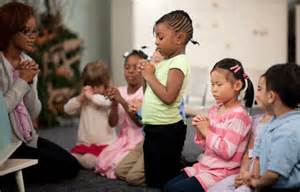 Remember going to Sunday School with your parents?  You'd come in the door with the church bells ringing (often all the boys would be allowed to "ride the rope" to ring the bell but girls couldn't because they were wearing dresses!)
Mom and Dad would wave goodbye and go into the Sanctuary and you and all your friends would go off to the Sunday School classrooms (usually in a different wing of the building or the basement) where you would spend the next hour singing about Zaccheus and Being a Sunbeam for Jesus complete with motions. A memory verse would be read several times, and then, during special times of the year, you would work on your Christmas program or your Easter Pageant but most of the time you would sit quietly and watch Sister Tuttle (you all called her "Sister Turtle" behind her back) tell a Bible story while sticking little paper figures to a felt picture of rocks and sky and trees. (Oops!  Moses just fell to the floor again!)  At the end of the lesson, one at a time you would be called on to recite your memory verse (it was always so unfair because the first to be called on really had to know the verse, while the last ones could just remember what the earlier kids said ahead of them!)  After Sunday School your next stop was an hour sitting beside your parents, singing hymns and listening to the preacher as he told of God's love, God's plan for your life, God's sorrow at your sin, and God's forgiveness when you yield to His calling.
Well, Sister Tuttle is long gone.  So is the felt board and poor Moses and even Zaccheus and memory verses in many churches.  In fact, in many churches, Sunday School is gone.  It's been replaced by nurseries for infants and toddlers and "Junior Church" for older children and, sadly, in many churches both of these programs have become glorified babysitting services for parents who want to worship in peace.
Vladimir Lenin is credited with saying, "Give me four years to teach the children and the seed I have sown will never be uprooted."  But if we don't bother to sow nutritious seeds during those early years what will grow up besides weeds?
Until the eighteenth century children weren't considered as a separate type of human.  They were looked at as miniature adults and were treated as such.  They were expected to have an attention span that would stretch to meet the requirements and a "wiggle-proof" bottom.  By the early nineteenth century, when the Wesleys in England and the Puritans in America were beginning to formalize children's education, people were realizing that children were different, with short attention spans and a natural tendency to wiggle and wander when they were bored. We began to create environments more welcoming for children and more conducive to children's learning styles.
Unfortunately, we have now come to the place where we no longer expect our young children to learn anything about the Bible or Jesus.  Instead, we hire or ask members whom we've thoroughly vetted to take care of our children during the church service.  But what did Jesus say about children?  Did He not say, "Let the little children come to me, and do not hinder them, for the kingdom of God belongs to such as these" (Lk.18:16 NIV)?  A little food for thought, here ... when adults do nothing to encourage children to learn about Jesus but, instead, simply find them a room away from the worship center of the church so they can watch videos and play are we not hindering them?
Discipleship begins with the first worship chorus mama sings as a lullaby to her baby and never ends until that grown baby lays down his earthly treasures and walks into the arms of Jesus.
The link at the top of this page will take you to the source of many great children's discipleship courses from the International Pentecostal Holiness Church.  Cruise by and see what treasures you can dig up for your youngest learners!

http://www.teachsundayschool.com/lordsprayer-ss.html
The link above brings you to a specific lesson about teaching children the Lord's Prayer.  While the lessons on this site aren't specifically Pentecostal, you can sometimes mine it for individual lesson ideas.
if you like what you see, you can either follow this link: http://www.teachsundayschool.com/
or simply delete the end of the sample link
On this site you will find things for sale and things for free and while I wouldn't recommend using these lessons extensively, adding a lesson or two from this site might add a little variety to your curriculum.  Even if you're a little shy about using material from outside the Pentecostal tradition, it might be possible to adapt some of these lesson ideas to carry the Pentecostal message.
This site has lesson plans and activities for all ages as you can see by this sample of their Blog Index:
Sunday School Lesson Plans   Sample Sunday School Lesson   Sunday School Activities   Church Fundraising
Sunday School Teachers Activities   Mailin Order Form   Adult Sunday School Lesson Plans   Church Games