I Am Not A Poet: Journeys in Faith and Self-Discovery by Jackie David Johns, Ph.D. 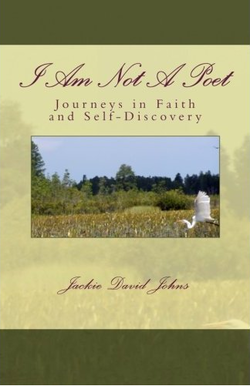 This book is  a collection of poems, each  written by the author. They were composed over a  period of more than twenty  years. Most were not written to be read by others.  They were instead exercises
in self-discovery.

The author began  writing them at a point  of great despair. His faith was under tremendous strain.  Everything he thought he knew about God and his self was being challenged at the  core of his being.
He thought he had been faithful. He was doing his part, but  God wasn’t doing  His, or so it seemed. Like Jacob long ago, he was wrestling  with God and God  was winning.  Out of those experiences, he discovered some  truths  about himself, his God, and the Christian life.

As exercises in  self-discovery, these poems are in a  sense autobiographical. A few of them are
explicitly narrative in nature,  tracing issues through the seasons of the  author's life. Further, except for the  first and last pieces, the writings  appear in the order in which they were  written. That arrangement is in one  sense also autobiographical, tracing the  author's evolution in themes for  writing.

The Pedagogy of the Holy Spirit According to Early Christian Tradition By Jackie David Johns, Ph.D.

Early Christian literature reveals that  the church perceived its teaching ministry, indeed its entire existence, as  being under the close supervision of the Holy Spirit. However, little attention
has been given in modern times to the role of the Holy Spirit in church  pedagogy. This doctoral dissertation sets forth an inter-disciplinary  descriptive analysis of pedagogical issues associated with the Holy Spirit in  the literature of early Christianity and it offers a brief paradigm for  Christian education based upon that analysis.

The method of this study  was to ask a series of questions from the perspectives of historical theology
and pedagogy. Three theological questions concerning the Holy Spirit were linked  to six questions from educational philosophy as a means of probing into the  historical record.  The core question being, in the eyes of the ante-Nicene  church, who was the Spirit and how did the Spirit work in the church to form
believers?


​
​Pentecostal Formation: A Pedagogy Among the Oppressed By Cheryl Bridges Johns, Ph.D.